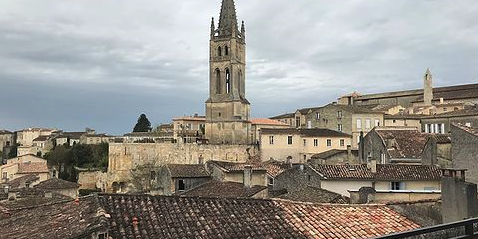 I just returned from my 30thstraight vintage evaluation in Bordeaux and tasted over 1000 wines from the 2017 vintage and the results were very mixed but with some impressive wines given the difficult weather conditions.

The calling card of the vintage was of course the serious frost that hit Bordeaux on April 27-29 devastating the low lying soils of the right bank and the inland areas of the Medoc and Graves. Unfortunately this was not the only issue that winemakers had to deal with; after a warm May and early June, late June produced rain while July and August were unusually cool and that continued until mid September when drizzle and rain became an issue. Mother Nature was tough on Bordeaux in 2017.

The very best wines of 2017 have come from the greatest terriors and from the Right Bank estates of St-Emilion and Pomerol; where in every vintage the productions are always small and have worldwide demand. Delicious wines were made at Ch. Petrus, Pavie, Angelus, Figeac, L’Evangile, Vieux-Chateau-Certan, La Gaffelier, Canon-La Gaffelier, Clos Eglise, Larcis Ducasse, Pavie Macquin, Clos Fourtet, Bon Pasteur, Troplong Mondot, and Canon. All of these wines will be difficult to acquire in 2017 with less volume.

The wines on the Left Bank were not as lucky overall. Most wines had good color but always had us searching for any ripe, sweet fruit to go with the tannic structure. This lack of ripeness is the key as many wines were hollow in the mid-palate with no flesh or texture and hence did not finish or stopped. This being said as in every vintage there are exceptions and a few of those would be the First Growths and wines like Ch. Montrose, Pontet Canet, The Pichon’s,  The Leoville’s, Branaire and Ducru Beacaillou, Malescot, Rauzan Segla, Palmer, Smith Haut Lafitte, Malartic-Lagravier and Haut Bailly.

So the real question here is where 2017 fits in the Bordeaux marketplace and should it be bought pre-arrival. The answer is to buy only if the vintage of 2017 is important to you for birth year, marriage, vertical, or for some other reason. The facts are that 2017 comes after 3 really good to great vintages and cannot compare to those vintages quality wise, and there are so many outstanding wines from 2014, 2015 and 2016 that are widely available in the market, many at opening prices. Even a drastic price reduction is not reason enough given the quality and marketplace conditions.

For now 2017 will take its place alongside 1997 and 2007 that found there time in the marketplace 10 years after the vintage date, when the wines quality and drinkability met the correct price.

The good news from 2017 is that the Blancs from Pessac-Leognan and Sweet wines from Sauternes, Barsac and Cerons turned out to be quite good.