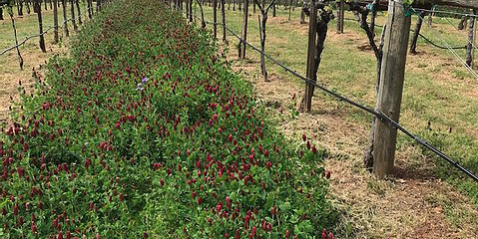 After a cool April and May here in California the vineyards are a bit behind schedule, ten days to two weeks but with no rain in the forecast no one is very worried. Everyone is quite sure that the California sunshine will return in full force soon and everything will catch up.

The situation in Bordeaux is quite different, it seems like it has been raining there since November! When I arrived there on April 7thmy friends were sick and tired of the rain. At that point Bordeaux had received half a year of rainfall in three months and now 2 months later it is still raining. After a run of three lovely vintages of 2014, 15 and 16 it seems Bordeaux cannot catch break with frost and cold weather affecting the quality of the 2017, very wet weather so far in 2018 and then some devastating hail that hit the region on May 26th.  The hail did some damage in Pessac at Ch. Smith Haut Lafitte and in Macau at Ch. Cantemerle. The Entre de Mer and the areas Bourg, Blaye and the Cognac region were hit especially hard. I’m hoping that Mother Nature will hit the switch and bring sunshine and heat to Bordeaux very soon! I hope to bring some California Sunshine to Bordeaux when my “Taste the Greats of Bordeaux Tour” starts on June 24.

In June I always like to check in with my growers and see how things are progressing in the vineyards; Mike Lamborn and Randy Peters always give me candid reports on their ongoing efforts to produce great wines.

Randy’s family has grown grapes for over 100 years in Sonoma and he is Co-Owner of Kokomo Winery with winemaker Erik Miller. Randy reports…

Hi Ralph, I Just got back from the Sebastopol ranch. The Pinot and Chardonnay are just through bloom about 10 days later than the last 4 years. This is more of the historic normal. If it continues cool will be picking these in October 10 to15 but we will see if the summer is as cool as the spring. The good thing about this cool spring is that we had 21 inches of rain from March 5 to April 30. The Sauvignon Blanc, Zinfandel and Cabernet are all at the same time frame as the Sebastopol beginning harvest after Labor Day for S B and finishing with the Cabernet in October. The crop size looks average for everything except a little light on Zinfandel. We are shoot positioning and suckering the vines now moving to some leafing on the morning side next week for filtered light penetration. The grapes will have a good hang time and ripen well.

Mike Lamborn reports in on the vineyard and exciting news on a new release!

All is dandy at the farm. We are a tad behind ( 7-12 days ) but I am not the least bit concerned about that.  I expect that by this weekend we’ll see some bloom, and off we’ll go.  Hopefully the fruit will set in 7 days and we’ll have this crucial stage behind us. We have been generous with the water and shoot growth has been excellent. The potential crop looks strong, maybe (??) a tad heavier overall than last year (definitely heavier in the new Cab vineyard by 40-50% as would be expected).

You are now up to date!